APHLIS is assisting four African countries to estimate the postharvest losses of major root and tuber food crops, a first step in developing more sustainable and efficient food systems. Working with partners in Nigeria, Togo, Tanzania and Uganda, the project is investigating cassava and sweetpotato, crops that are critical to the food security of millions but whose losses along the value chain are scarcely understood and often overlooked. 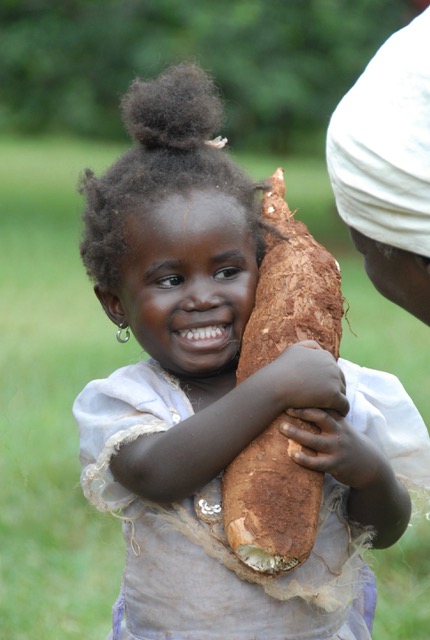 “Cassava is Africa’s second most important food staple after maize,” according to Dr Aditya Parmar, one of the APHLIS scientists leading the study, “yet it receives a fraction of the research attention given to cereals such as wheat, rice and maize. There are a handful of post-harvest loss studies on root and tuber crops, but these rely heavily on surveys and guesswork, and we have noticed significant data gaps and a high degree of disparity between perceptions and actual losses.”

Assessment teams selected a representative sample of farmers, traders and processors in administrative units (district/village) across different regions in Togo, Nigeria and Uganda. The teams investigated sites in three to four different agroecologies in each country, working with farmers, transporters, and processors to measure and understand the losses occurring during and after harvest in these food systems.

Step-by-step guidelines on the direct measurement of cassava and sweetpotato losses are being used in the studies. The guidelines are consistent with global accounting and reporting standards developed by the Food Loss & Waste Protocol (FLW Protocol), a multistakeholder effort that addresses the challenges in consistently measuring and credibly reporting food loss and waste.

In Africa, cassava and sweetpotato are generally sold as fresh roots or processed into dried products such as gari (ground cassava flour), chips/chunks and tapioca. The assessment aimed to determine losses at all stages along the fresh produce value chain, from harvest to home storage, transport to market storage and retail display as well as the major processed products from cassava, i.e., gari in West Africa and cassava flour in East Africa. The studies were aligned with the cropping cycles and seasons. The assessments used the ‘load tracking’ measurement technique, which weighs the crop at different stages along the value chain to obtain precise measurements of the quantity and quality of produce lost at each stage. These figures can later be converted into percentage losses. All loss estimates generated by the project will be freely available on the APHLIS website (www.aphlis.net).

While the work is still underway (it is expected to wind up early next year), the impact of the project is already being felt in three of the countries. Understanding where and when postharvest losses occur helps countries anticipate where and what type of mitigation measures are most needed, enabling them to target their investments to fit the evidence. It also allows them to develop more effective national postharvest loss reduction strategies and to track progress in achieving their loss reduction goals. In the 2014 Malabo Declaration, African Union governments committed to cutting current levels of postharvest loss in half by the year 2025. At the global level, the Sustainable Development Goal 12.3 is “to halve per capita food waste at the retail and consumer levels and reduce food losses along production and supply chains, including post-harvest losses, by 2030.”

“Postharvest loss reduction is important for increasing food availability, decreasing pressure on available land and natural resources and ensuring returns on the investments made in production,” said Kukom Edoh Ognakossan, an APHLIS expert who is conducting the Togo study. “The first step in reducing postharvest losses is knowing the magnitude and the type of the losses taking place. The APHLIS project allowed us to assess postharvest losses along entire fresh and processed cassava and sweetpotato value chains in Togo, this is the first time it has ever been done. The assessment used actual measurements, which is quite rare. We were able to identify postharvest loss hot-spots and to document postharvest handling practices along the value chains to determine areas for improvement.” Ognakossan is a postharvest specialist in the Laboratoire de Recherche sur les Agro-ressources et la Santé Environnemental/Ecole Supérieure d'Agronomie, Université de Lomé, Togo.

“The postharvest study is of great interest to gari processors in Nigeria. The farmer processors are eager to know the outcome of the study in order to determine the unit operations where significant postharvest losses are taking place,” said Abdul-Rasaq Adebowale, a project partner from Nigeria.

The African Postharvest Losses Information System (APHLIS) is the leading international effort to collect, analyze and disseminate data on postharvest losses of cereals, legumes, roots and tubers, including the economic and nutritional dimensions of such losses. APHLIS postharvest loss estimates are available at www.APHLIS.net.