Stemming postharvest loss will be critical if we are to feed the world in the face of a changing climate. At the same time, climate change is creating conditions that could make postharvest loss an even greater challenge. 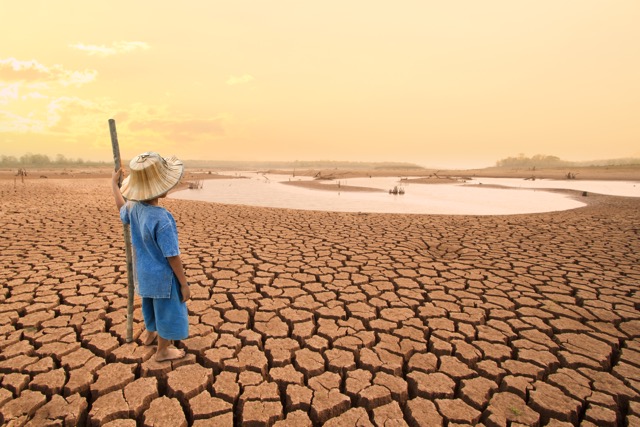 Efforts to reduce postharvest loss are critical in the face of climate change. (Image: Piyaset / Shutterstock)

One of the greatest tasks we face in the 21st century is to feed the growing human population sustainably, and to do so in the face of climate change. By 2050, we will have to nourish 2 billion more people than we do today, most of them in developing countries. To succeed, we will have to increase food production by 60%.

So far, the policy response has mostly been to focus on increasing crop yields through input management and new high-yielding varieties. However, achieving a massive increase in yields may not be possible everywhere, particularly in light of climate change and already stressed land and water resources.

One common-sense solution is to reduce postharvest food losses.

According to the Food and Agriculture Organization of the United Nations (FAO), around a third of the food produced for human consumption is lost or wasted. This represents a cost of US$ 2.6 trillion every year, including US$ 700 billion in environmental costs and US$ 900 billion in social costs. In sub-Saharan Africa, the annual value of postharvest grain loss is US$4 billion, which exceeds the value of total food aid that the region has received over the past decade.

Postharvest losses can occur at every point along the value chain, including during storage, whether on-farm or at market; processing (threshing, winnowing and drying); or transport from field to farm and farm to market. Such losses decrease the amount of available food, which raises prices and reduces producer income. Postharvest losses also waste the resources used to produce the lost food in the first place (e.g. fertilizer, irrigation water and human labour). For every $1 spent to improve yields, $0.19 are lost due to inadequate postharvest practices.

The impact of climate change on food loss

Climate change is expected to have a profound impact on agricultural productivity, post-harvest losses and value chains. Climate change affects agricultural productivity both directly, by introducing changes in agro-ecological conditions (e.g. drought, variable precipitation, extreme weather events) and indirectly, by giving rise to new diseases and pests. In addition, the planet’s mean surface temperature and atmospheric carbon dioxide concentrations continue to increase, which will cause a further loss of productive land and decreased crop productivity.

Aflatoxins are carcinogens that affect many crops in tropical and subtropical countries where temperatures and humidity are high. Produced by moulds, aflatoxin infestation can occur in the field or after harvest when produce is improperly stored. Today, aflatoxins affect 4.5 billion people worldwide. Nearly 30% of liver cancer cases worldwide are directly associated with the consumption of foods containing aflatoxin. In combination with poor nutrition, aflatoxins also contribute to stunted growth and compromise the immune systems of children. According to FAO, an estimated 25% of the world’s food crops are affected by mycotoxins, particularly aflatoxins, resulting in billions of dollars in losses. And this will only increase as the growing humidity in formerly dry climates and increasingly irregular weather patterns propel the spread of the poison.

The impact of food loss on the climate

Food loss and waste account for about 4.4 gigatonnes of greenhouse gas emissions each year; these include on-farm agricultural emissions and the energy used to produce, transport and store food that is ultimately lost or wasted. If food loss and waste were its own country, it would be the world’s third-largest emitter—surpassed only by China and the United States.

Although meat contributes only a small part to global food waste in terms of volume (less than 5%) it has a significant impact on climate change, contributing to over 20% of the carbon footprint of total food waste. This is because the meat carbon footprint includes the emissions from producing meat (e.g. the methane emitted by ruminants), the emissions related to feed provision (e.g. the fertilizer used for the production of feed) and the emissions from manure management. Thus, efforts to reduce greenhouse gases related to food waste should focus on meat and dairy as well as fruit, vegetables and cereals, which are very vulnerable to postharvest loss.

The benefits of reducing loss

Postharvest loss can be greatly reduced through targeted investments in technology design and capacity development. In sub-Saharan Africa, one of the world’s poorest and most food-insecure regions, the World Bank estimates that just a one percent reduction in postharvest losses could lead to economic gains of $40 million each year. And most of the benefits would go directly to smallholder farmers.

Measures to reduce food loss can also increase climate resilience. For example, improving storage or refrigeration can reduce the vulnerability of harvested produce to heat or pest infestation and as well as preserving nutrients, especially in highly perishable produce like fruit and vegetables. Improving processing techniques not only helps reduce postharvest loss but also provides farmers with the opportunity to improve the quality of their produce, exploit new markets and increase their incomes.

Reducing postharvest losses requires reliable data on where, when, why and to what extent they are occurring in order to inform decisions on investment in loss reduction programmes. Yet, such data are scarce in developing countries; as a result, there is little understanding of the impact that losses have on smallholder productivity and welfare, and the benefits that could arise from interventions to reduce them.

APHLIS delivers science-based estimates of postharvest losses in Africa, including the nutritional and financial dimensions of loss. APHLIS estimates annual losses at the provincial, national and regional levels for cereals, pulses and roots and tubers. This information is freely available on the APHLIS website.

Understanding the magnitude of postharvest losses, where loss occurs, and its causes and impacts guides the postharvest loss research agenda and helps scientists to evaluate the impact of efforts to mitigate loss. This helps decision-makers formulate effective policies and invest in successful postharvest loss programmes.