Reducing postharvest losses to transform lives: the case of the sorghum value chain in Northern Ghana

Sorghum is a critical crop in Ghana, both for food security and as a source of household income. Mainly grown by smallholders, it is an energy-rich staple that contains essential minerals such as potassium, phosphorus and magnesium. In Northern Ghana, brewing sorghum to produce a traditional beer (pito) is an important cottage industry. The crop’s industrial potential is also on the rise due to its frequent use by the formal brewing industry as a replacement for imported barley.

Although sorghum’s relatively higher price has led maize and rice to overtake the crop in Ghana’s food systems, it continues to be important for food security and has been prioritized by the government due to its drought tolerance and ability to withstand high temperatures. However, sorghum often suffers from a high level of postharvest losses (PHL), affecting the quantity as well as the quality of the produce. A recent study under the Value Chain for Development (VCA4D) project, which is funded by the European Union, illustrates how PHL-reducing technologies and practices can create new opportunities for farmers and contribute to sustainable and inclusive growth. 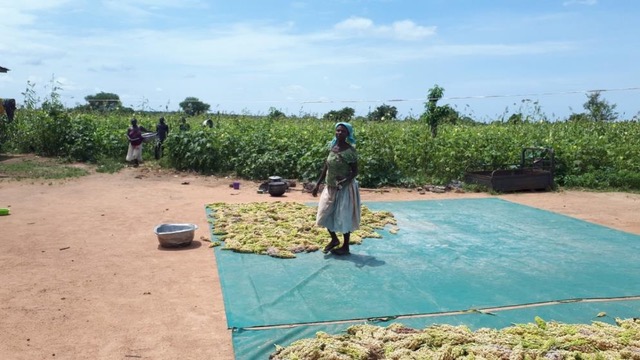 The study compared 2018 data from the African Postharvest Losses Information System (APHLIS) with information gathered through a rapid assessment of sorghum farmers in 2019. The aim was to estimate the PHL reductions achievable along the sorghum value chain by adopting loss-reduction approaches. A quantitative value chain analysis (VCA) framework was used to evaluate the impacts on smallholders, businesses, society and the environment.

Ghana’s strong commitment to agricultural growth is supported by commodity aggregators (CAs), who procure produce from local smallholder farmers. The CAs have contacts with corporate buyers and government schemes that are interested in bulk purchases of crops. Their presence in local markets weakens the power of traders and helps ensure fair prices for farmers. In Northern Ghana, the aggregators secure funds to pre-finance farm inputs (fertilizers and pesticides) and equipment. They buy sorghum from farmers to supply to brewers and wholesalers. They provide extension advice and provide off-farm drying, cleaning and storage facilities. With government backing, the CAs have helped farmers to reduce PHLs by promoting mechanized threshing, field drying using tarpaulins, prompt and efficient harvests, and reductions in household-level storage.

The 2018 APHLIS estimates put aggregate postharvest losses of sorghum at 12.4 percent, equivalent to about 39 200 tonnes of sorghum grain (total production in 2018 was 278 000 tonnes). The lost food had a value of around USD 14.6 million and could have met the food energy requirements of 333 537 children under five years of age. According to farmers participating in the project, their PHL of sorghum had dropped to 6.6 percent by 2019, thanks to simple and readily-available postharvest handling technologies and practices.

For instance, the farmer (shown in the photo) is drying sorghum grains on a tarpaulin rather than on the bare ground. This helps to reduce losses as well as the contamination of the grain with foreign matter, thereby improving its quality and potential to sell to formal markets. If this experience could be replicated throughout the sorghum value chain, it is estimated that Ghana would save 16 120 tonnes of sorghum with a value of USD 3.55 million and the capacity to provide the annual dietary energy (kcal) requirements of about 102 000 children under five.

The combination of higher yields and better postharvest handling practices made it possible for farmers to nearly double their annual sorghum-based income.

The VCA4D study indicates that affordable technologies can reduce PHL, with significant positive impacts. These include improved food security and increased income in smallholder households, due to the increased availability of produce for household consumption and sale. The study further showed that the technologies adopted by participating farmers increased yields by about 20 percent. However, it was the combination of higher yields and better postharvest handling practices that made it possible for farmers to nearly double their annual sorghum-based income to GHS 1 375 (USD 285). This income level is just above the national poverty line (estimated at GHS 1 315 in 2017).

In addition, the sorghum grain available for household consumption increased by over 40 percent, from 8.5 bags (50 kg per bag) to about 12 bags per household. The increased supply of quality grain made it possible for industrial breweries to substitute sorghum for imported barley malt, hence reducing demand for foreign exchange. Furthermore, evidence from the study shows enhanced opportunities for value addition, for example in producing processed food products for urban households and infants in particular.

This case demonstrates that reducing PHL can lead to real and quantifiable gains. What is needed is greater investment – by governments, donors and the private sector – in PHL-reduction technologies and practices. We add these caveats: the assessment was based on memory recall by the farmers and also covered a rather small sample of the sorghum-producing population in Northern Ghana. A more extensive validation of PHL outcomes using robust measurement tools would therefore be most welcome.